Contributing to the game

The Energy Transition Game was first developed in The Netherlands. However, the aim have always been to spread the game across Europe and to make it open for contributions. You are warmly invited!

Co-creation of the Energy Transition Game has two main objectives:

The following elements of the game can be adjusted: 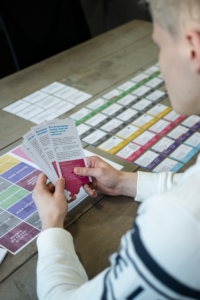 Please take a look at the customization manual before sending your contribution.

Would you like to organize a pilot of the game in your country? Are you interested in localizing the game or translating it to your language? We are looking for ambassadors. Feel free to send an e-mail to Jan Cromwijk.

The further development of the Energy Transition Game is a fully transparent process. New adjustments or additions can always be used by others if it is to their interest.

Contributing to the Energy Transition Game equals contributing to a network of co-creation. In this way, it will eventually be possible for anyone to get engaged and learn about sustainability of the built environment in a fun way.

Publishing translated and customized versions of the game

All contributions, suggestions for localisation and question can be send by e-mail to Jan Cromwijk.